With operation in a special device is implanted penis, which may take the form member erect. It gives a man the opportunity to have sex. 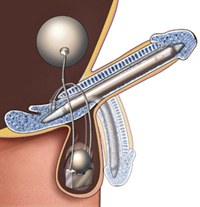 Penile implants – implant for men, wanting to get an erection, if:

Successful procedure in 90% -95% patients. Penile prosthesis does not affect the sensation of the skin of the penis or the ability to achieve orgasm or ejaculation.

Complications are rare, but the procedure does not guarantee the absence of risk. If you plan to penile prosthesis, you need to know about possible complications, which may include:

Factors, that may increase the risk of complications:

How is penile prosthesis?

In the run-up procedure:

They can be used the following types of anesthesia:

To prevent infection, genitals will be treated with an antiseptic. An hour before the transaction entered antibiotics. The penis is inserted into the catheter (a thin tube), to drain urine from the bladder.

There are two types of penile implants:

There are two types of inflatable implants: two or three parts. For both types of installation, physician first makes a small incision in the upper part of the scrotum. The incision is made so, in the future, the seams are under the skin and can dissolve themselves.

The two parts of the implant, cylinders, They will be inserted into the penis. Pump (liquid) It is inserted into the scrotum. This type of implant is easier to install, but it takes up more space in the penis, leaving less room for expansion.

The doctor makes an incision in the back of the head and at the base of the penis. Also incision is made in each of the two long tubes of spongy tissue inside the penis. Doctor vstavlyaetv each tube rod. At the end of the doctor closes the incision without the need for sutures.

How long will the penile prosthesis?

Penile implants: Will it hurt?

The pain may be felt within four weeks after surgery. Pain or soreness during recovery are removed with the help of painkillers.

The average time of stay in the hospital after penile prosthesis

The procedure is usually performed in a hospital. Usually stay is one day or more, if you have problems. In some cases, the statement can be made the day of surgery.

Care in a hospital

After returning home, follow these steps:, to ensure the normal recovery:

After discharge from the hospital need to see a doctor, If the following symptoms: