Sick sinus syndrome (SSS) it is not one specific disease. It is a term used to describe several disorders of heart rhythm. Weakness syndrome sinus include:

This disorder can be treated quite effectively. If you think, you can hurt SSS, you should seek medical advice, to determine the best method of treatment. 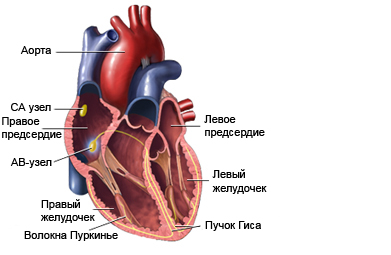 SSS cause problems with electrical signals of the heart. The problem begins in the heart, It called sinus (SA) node. This node – heart's natural pacemaker. When anomalies SA node become abnormal heart rhythms. Dysfunctions in the SA node may cause:

SSS is a rare disorder, It is most common in older people and those, who had the damaged heart tissue. SSS can occur equally in men and women. Rarely, in infants and children may also occur SSS, usually, due to congenital anomalies of the heart. Some of the risk factors for sick sinus syndrome include:

The symptoms of sick sinus syndrome

Often patients with sick sinus syndrome have no symptoms. Some patients experience cardiac symptoms, which may include a period of very fast heartbeats, followed by a very slow rhythm. Many of the symptoms of the disorder and non-specific soft sine. Some of the symptoms, associated with SSS include:

These symptoms may be caused by other, less serious diseases. If you experience any of them, consult a doctor.

SSS may go unnoticed for some time. Symptoms are similar to the symptoms of many other disorders. Your doctor may order tests, to help deliver a more accurate diagnosis. Probably, the doctor will ask about your symptoms and medical history. There will be a physical exam. Some additional tests might include:

For people, asymptomatic, Treatment may not be required. However, SSS is a progressive disease, which could further weaken the heart muscle in people with previous heart damage. This may lead to heart failure. As a result,, People with symptoms are treated. Most treatment plans include individual therapy bradycardia and tachycardia. Talk to your doctor about the best plan for you. Treatment options include the following:

Kardiostimuljator – a small device, It operates on battery. Electrodes from the pacemaker are placed on the right side of the heart. The electrodes sent signals to the heart, to stimulate it. This helps to maintain normal cardiac contraction by electric pulses. Kardiostimuljator – a very effective treatment for bradycardia.

Medications used, to reduce symptoms of tachycardia. It is often given to people with a pacemaker.

Unfortunately, for most people, SSS can not be prevented, because the disease is usually caused by prior damage or scarring of the heart tissue. But, Some methods of reducing the likelihood of developing this disorder include: