Glaucoma is a group of diseases, that can damage the optic nerve and blindness. One type of glaucoma, which is called open-angle glaucoma, the most common form of the disease, often caused by increased pressure inside the eye. This type of glaucoma can lead to vision loss and even blindness. 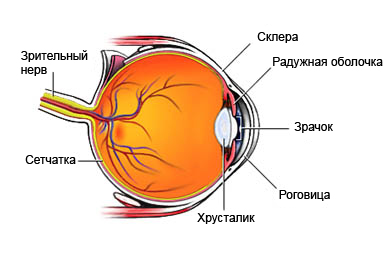 The causes of glaucoma

In front of the eye there is a small space, called the anterior chamber. The front chamber is located between the lens and the cornea. Fluid, located therein, It supports the shape of the surrounding tissue. When glaucoma, fluid, for unknown reasons, can accumulate inside the eye, which causes an increase in intraocular pressure. This can lead to damage to the optic nerve or other parts of the eye, what, in turn leads to the loss of.

Factors, which may cause glaucoma include:

Risk factors for other forms of glaucoma may differ from the.

Glaucoma is usually not immediately causes symptoms. In most cases, vision remains normal, the pain is not felt. However, with the progression of glaucoma, gradually begins to deteriorate peripheral vision. Objects, are front may still be visible, but objects, located on the side can be difficult to see. As the disease progresses, the field of vision narrows, and this can lead to total blindness. Glaucoma, usually, slowly progressing disease, causing damage over many years, before obvious symptoms appear.

An ophthalmologist or optometrist can often detect glaucoma during ophthalmologic examination. During the inspection of, pupils will be dilated with special drops, to check for glaucoma and other diseases. Dilated pupils helps a closer look at the inner part of the eye.

To detect glaucoma, your doctor may perform the following tests:

Although open-angle glaucoma can not be cured, it is often possible to reduce the symptoms of the disease.

Medicinal products for the treatment of glaucoma

They can be assigned eyedrops, eye ointments, or tablets. Some formulations are designed to reduce pressure, and slow down the production fluid in the eye. Others may improve fluid drainage.

For most people with glaucoma, regular use of drugs can control the progression of damage by lowering intraocular pressure. Nonetheless, these drugs can stop working after some time, cause side effects, or be ineffective, to monitor the progression of damage. If you have problems, your doctor may prescribe other drugs, change the dose or suggest other ways to solve this problem.

Essential drugs for the treatment of glaucoma:

Laser surgery for the treatment of glaucoma

The operation for the treatment of glaucoma

The operation for the treatment of glaucoma can help remove excess fluid from the eye and reduce intraocular pressure. Nonetheless, operation, usually, It is performed as a last resort, patients, whose glaucoma continued to progress, despite treatment with eyedrops, pills or use of laser surgery.

Monitoring the development of glaucoma

If there is no decrease in the visual field, doctor may decide on monitoring the development of glaucoma, without treatment. Since glaucoma is a very variable disease, the decision about treatment is made on a case-by-case basis. In certain cases glaucoma can be difficult to diagnose. Many people have some signs of glaucoma, but not sick it. Some physicians decide to monitor patients with suspected glaucoma. Treatment begins, if there is a risk of disease progression.

There are no guidelines for preventing glaucoma.

Early detection and treatment of glaucoma, before it will cause a serious loss of vision, It is the best way to combat the disease. Since vision loss is gradual and begins with the deterioration of peripheral vision, most patients do not notice any visual changes, until there is significant damage to the eyes.

It should have regular eye examinations, including the use of drugs to enhance pupils. This is particularly important, if there is a high risk of developing glaucoma.