The flu, severe cases of measles, Pertussis occurs acute inflammation of the trachea and bronchi of viral origin - acute bronchitis.

From the secondary flora often cause bronchitis, pneumonia, strep and influenza bacillus, and complications of influenza - gold (pyogenic) staphylococcus.

Acute bronchitis It may also occur due to the significant amount of dust inhalation, gaseous or vaporous chemicals. Inflammation of the bronchial mucosa occurs with hypersecretion of bronchial glands, cough and phlegm. With the defeat of the small bronchi shortness of breath. Acute bronchitis - one of the most common respiratory diseases. Contribute to the emergence of his hypothermia, smoking, focal infection of the nasal part of the pharynx, congestion in the lungs during heart failure, etc..

Depending on the extent and severity of the inflammatory process, the clinical manifestations of the disease can be razlichnymi- from short one-two-day lung ailments with normal body temperature, cough and chest discomfort to severe fever, neutrophilic leukocytosis, shortness of breath and cyanosis, indicating the presence of pneumonia or bronhnolita. Severe forms of the disease occur mainly in children, elderly, and in frail people and those, chronic bronchitis.

Depending on the nature of fluid distinguish catarrhal and purulent bronchitis.

Purulent bronchitis It is characterized by a large number of white blood cells, than catarrhal-purulent. Epithelial cells of the bronchi due to their death at a purulent inflammation hardly found. There may be red blood cells.

In acute bronchitis on the surface of the inflamed mucous membrane is sometimes formed fibrinous film, which can be separated from the wall of the bronchi, often with a strong cough with phlegm thrown together in a branching cast. Acute fibrinous bronchitis observed in diphtheria, pneumonia, caused by streptococcus pneumonia (pneumococci), and other diseases.

Asthmatic bronchitis, wherein the normal signs of inflammation are absent, It is characterized by the release of a small amount of mucous expectoration gelatinous, containing many eosinophilic granulocytes spiral Kurshmana, Charcot-Leyden crystals, fibrin, epithelial cells of the bronchi and single erythrocytes.

Chronic bronchitis the frequency of occurrence is one of the first places among the chronic nonspecific respiratory diseases, and the number of cases, as the results of numerous studies, the last 10-15 years has been steadily growing.

An important role in the occurrence of chronic bronchitis play polyutanty (admixture to the inhaled air of various substances, adverse effect on the mucous membrane of the bronchi), among which the most important is the inhalation of tobacco smoke. In second place are polyutanty of industrial nature (products of incomplete combustion of coal, natural gas, oil, sulfur dioxide and others.).

The value of an infection as an etiological factor is disputed by many experts, consider, it arises as a result of a second violation of protective mechanisms of the respiratory tract, t. it is. exacerbates the severity of the disease. However, in the event of recurrence of chronic bronchitis in adults and children, the infection is paramount. The most frequent recurrence of the disease are caused by viruses, Mycoplasma pneumonia, sown as Streptococcus pneumonia, Haemophilus influenzae, etc..

As a result of a hypertrophy of bronchial glands, increase in the number of goblet cells and their appearance even in the bronchioles (normally they are absent) bronchi accumulate excessive amounts of mucus, increases its viscosity. All this leads to disruption of the mechanisms of cleansing the bronchi bronchial secretions to form sputum, which is removed cough, is a kind of compensatory mechanism, helps cleanse the bronchi. In a healthy person the process of cleansing the bronchi ciliated epithelial cells of the bronchial tubes is carried out, the foreign particles are transported, sluschivshiysya bronchial epithelium and mucus, allocated bronchial glands and goblet cells, upwardly toward the trachea and larynx.

Clinical manifestations of the disease characterized by a triad of core symptoms:

The character of sputum in chronic bronchitis It depends on the stage of the disease. At the beginning of the disease it is often the mucous, and can be an exacerbation of purulent mucous or mucopurulent. Pus and blood in the sputum often take the form of streaks. In the later stages of the disease is almost always sputum mucopurulent.

In patients with chronic catarrhal bronchitis in acute nature of the sputum may be purulent mucous. On microscopic examination, it is possible to find a different number of epithelial cells of the bronchi, often found in the form fibrin fibers and leukocytes.

In hypertrophic form of bronchitis the number of epithelial cells of the bronchi increases significantly. They occur in clusters, layers and groups, resembling glandular structures. 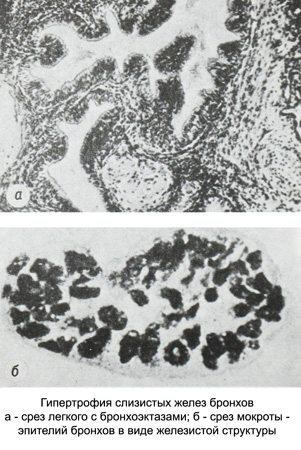 Often on the periphery of the group noticeably stir microvilli. Bronchial epithelium often turns into squamous epithelium, undergoes fatty degeneration and vacuolization. The size of the cells of the epithelium of bronchi metaplazirovannogo (large or small) You can roughly judge whether, where in the bronchi has changed cell surface epithelium.

Purulent chronic bronchitis characterized by purulent sputum, wherein the primary cell substrates are neutrophilic granulocytes. There may be red blood cells. Bronchial epithelial cells are observed in small quantities or almost not detectable. In some patients with wheeze (predastma) among leukocytes in sputum eosinophil granulocytes predominate, can meet Charcot-Leyden crystals, fibrin and spirals Kurshmana. The increase in the number of sputum alveolar cells observed in the propagation of the inflammatory process in the terminal and respiratory bronchioles.

In step catarrh of the bronchi in peripheral blood abnormalities were observed. When purulent bronchitis observed moderate neutrophilic leukocytosis with a shift to the left. In patients with severe respiratory failure from- for erythrocytosis and respiratory acidosis is reduced ESR. The diagnostic importance is the determination of serum total protein, proteinogram, C-reactive protein, gaptoglobnna, sialic acid and seromucoid. During exacerbation of purulent bronchitis sputum increased content of glycosaminoglycans (mukopolisaxaridov) and fibers DNA, thus increasing its viscosity, reduction of the content of lysozyme and secretory IgA.

The clinical significance of these changes is to reduce the resistance of the bronchial mucosa to the damaging effects of infection, ингибированию активности a1-antitrypsin, and increase the activity of proteases, resulting in enhanced distribution of inflammation.